A Scout is Helpful. It’s the third point of the Scout Law and it’s something that Troop 60 of Daretown took seriously when they collected donations for Hurricane Harvey victims this past September.

The President of SJ Transportation, Ed Remster, reached out to local organizations, including Troop 60, to support their donation drive. SJ Transportation conducts business in Texas and already had a system set up to deliver the products. The Troop wholeheartedly agreed.

On Saturday, September 9th, the Scouts of Troop 60 conducted their own collection efforts by spending eight hours set up outside the Acme in Woodstown asking for donations. Some donated non-perishables like water bottles and canned items; others gave monetary donations, which were then used to buy more nonperishable items. Once the day was over, members of the Troop helped load the donations onto SJ Transportation’s vehicles headed to Texas.

Assistant Scoutmaster, Michael Reed, says the Troop alone collected about one and a half tractor-trailer loads of supplies to send to the victims of Hurricane Harvey.

Their actions and service were later recognized in the form of a letter from SJ Transportation. Included with the letter was a $1500 donation to the troop from Ed Remster, thanking them for their hard work and service to others.

In the end, Troop 60 served their fellow man by helping those less fortunate and successfully completed their “good turn daily.” 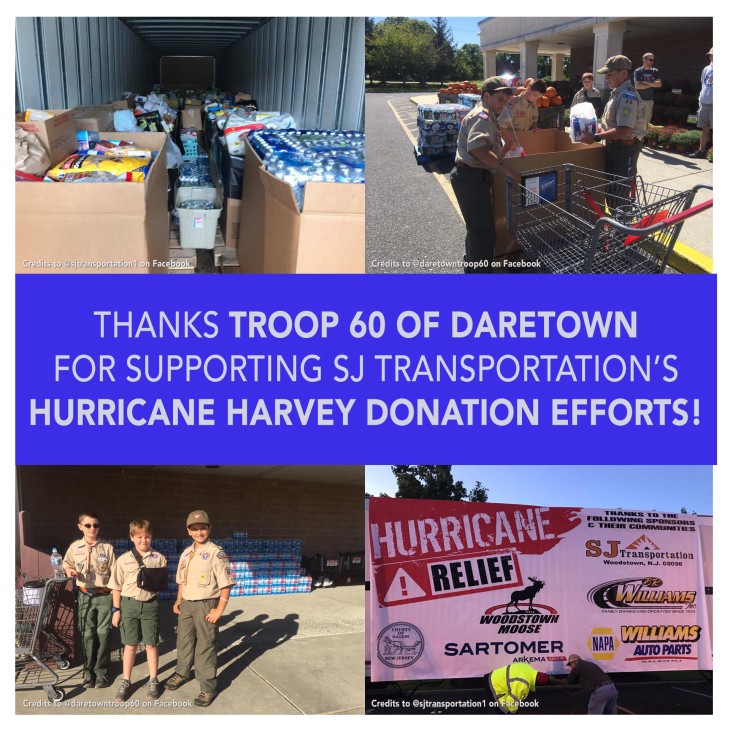 Satellite locations in NY, KY, IN